Sterling design and manufacture pumps to meet your needs.
Proudly Australian Made 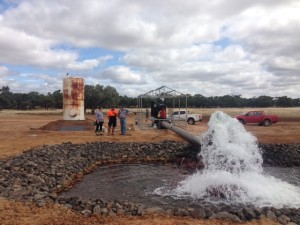 Local irrigators in Coleambally, New South Wales had been operating aging vertical turbine irrigation pumps for years at high costs, before a recent pump upgrade saw them using 25 per cent less diesel per ML with an increase in flow rate.

It’s the aim of every irrigator in Australia, to be able to use less fuel to pump more water, and after a pump upgrade by Sterling Pumps it was something Manager Eugene Dore was able to achieve.

“Our property had been operating these old pumps for almost 15 years and they became worn out and in need of replacing,” Mr Dore said.

“We approached Sterling to come have a look and told them that we wanted to be able to pump more water but also save money, as our previously pump, a smaller five-impeller vertical turbine, was becoming too inefficient and expensive to run.”

The business farms cotton and wheat at a property in the Riverina of New South Wales and has specific pumping and water requirements to avoid crop stress and ensure maximise yield.

Sterling Pumps General Manager Anton Merry said the pumps were in dire need of replacing, which they did with their 450D oil lubricated vertical turbine pump.

“This particular pump, while part of our standard range, is extremely energy efficient and Eugene was able to see really quickly the correlation between the fuel he was using, to what he’s pumping now,” Mr Merry said. 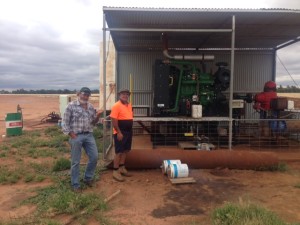 “The 450D keeps the pump speed down, as we’ve spent a lot of time on bearing technology to reduce bearing friction, and the modern hydraulic design was developed through Computer Fluid Design (CFD).

“CFD allowed us to design a product and work out the fluid movements and the efficiency without actually building it, so we could do a lot of work initially in the design before translating it into a pump and make sure it’s going to do exactly what it needs to.”

Mr Dore said that once it was installed he noticed the difference of the new pump straight away.

“The two big obvious things that we noticed was the increase in the volume of water and the decrease in diesel used per megalitre of water lifted out of the ground, which was the biggest factor for us.

“The manufacture and delivery of the new pump was also timely and Sterling gave great information to Barton Irrigators, who installed the pump, which meant we could size the engine and transmission to get the most efficiency out of the pump and diesel engine.

“We were that pleased with it that we installed an identical pump 12 months later in another borehole, and are still in contact with Sterling and asking them questions about other pumps for different operations on the farm,” Mr Dore said.

Mr Merry said this installation information formed part of the specialised inspection prior to selecting which pump would be best for the irrigators requirements.

“Initially we had to take into account every factor that influenced their pump system so we could find the best pump for the situation,” Mr Merry said.

“We looked at the amount of water they wanted to pump, the speed they wanted to run it and what their bore conditions were before selecting the oil lubricated vertical turbine.

“It’s fantastic to hear feedback from the customer that what we’re doing in-house is right and that the product we’ve designed is providing them with benefits.

“With the pump we provided, around 88 per cent of its energy goes into pumping the water with only 12 per cent being lost in friction, which is a great result.”

Sterling’s 450D oil lubricated vertical turbine pump is available in Melbourne and can be delivered quickly to anywhere in Australia.